KNOW WHO YOU ARE: THE ONLY MESSAGE THAT MATTERED AT GREENBIZ 20

I spent the week honoring the 20th anniversary of GreenBiz, arguably the most prominent annual convening of corporate sustainability leaders. And arguably the most challenging and infuriating conference I’ve ever attended.

The conference is run by long-time green business thought leader, Joel Makower, and his deep bench of talented writers, event producers and facilitators. I’ve long admired the prominent platform Joel and his team have nurtured for two decades, and to be sure his team knows how to run a smooth, efficient and waste-free event.

However, the false summit of urgency was by far the most maddening content served up. Make no mistake, the word urgency was prevalent throughout, uttered by pretty much every speaker I saw. But the actual plans, commitments and actions presented, the rote talking point answers to tough questions, all of it was underwhelming and no different than the messages promoted at GreenBiz 10.

The opening commentary at the conference rightfully brought attention to the growing rip-tide of climate depression and eco-anxiety. If we are to tackle the most challenging and transformative work any of us has ever encountered, we need to “care for ourselves and each other,” Joel offered in his first remarks. The mindful sentiment was ironic since most of the conference left me more depressed about the state of the climate fight than when I arrived. Indeed, if we are to transform the global economy in the next ten years, it was clear to me that none of the companies represented at this forum were really prepared to lead the way.

This was particularly pronounced in discussions regarding food, one of the most present topics of the conference. Yet again the right platitudes about the critical role our food choices and systems play in meeting climate targets were offered from the stages and panels. But the actual commitments, risk adverse posturing and outright deflection of hard truths on this topic fell far, far short of what abundant research has shown to be the path forward. Perhaps not surprising given that the event’s biggest sponsors and voices throughout the sessions were Dow, Bayer, Nestle and Cargill.

There were glimmers of hope sprinkled across the three days. I was encouraged to see the new alliance between Diversity, Inclusion and Philanthropy. The intersectionality of the climate movement is forcing deep structural changes internally, with several companies merging the function of the Chief Sustainability Officer with HR, Corporate Giving and Diversity leadership. This fundamentally moves sustainability from purely a material and resource challenge, to one that centers people and an inclusive work force. I was particularly impressed by the voices and actions from eBay, MGM and Levi Strauss in this regard.

And, to be clear, there were far more abundant plant-based and vegetarian catering options provided compared to last year. Who would have thought that event catering would save us all.As the event drew to a close yesterday, my despair reached its darkest moment in the midst Joel’s key note interview with Dow CEO Jim Fitterling. Again, I recognize there should be limited expectations when the leader of the world’s largest plastic producer, and notorious chemical polluter, takes the stage. But still, his robotic talking points promoting a future flush with plastic and unmitigated growth of fossil fuels left me sincerely wondering if this would be my last GreenBiz.
As Roger Waters recently announced in his This Is Not A Drill tour announcement, it’s time to “go make a fuss.” In a crowd where the word “Davos” was used frequently and “Flint” was never mentioned, it was quite clear this was no longer the forum where transformational change is going to flourish. If this conference wants to provide a platform for polluters to brand themselves out of accountability it can do so without my obscenely high registration fee. Prior to joining the corporate elite in the desert this week, I attended a local lunch town hall on climate justice that was infinitely more provocative, real and inspiring than anything I witnessed in the shadows of Camel Back Mountain.

But just as I was ready to give up, alas, it wasn’t event catering that saved the day, it was of course the kids.

Brian Mecinas, a 17 year-old, first-generation Mexican American student and leader of the Arizona Chapter of Youth Climate Strike, took the stage as the second to last speaker. And made one hell of a fuss.

Without hesitation, this young man, who admitted he had to leave to take a Chemistry test, told the room they should be ashamed of themselves. It was epic. It was righteous. He was the most articulate speaker I saw in three days and it wasn’t even close. It was everything I needed to hear, and I wasn’t alone. Brian left the stage to a standing ovation, one not granted to Mr. Fitterling.

I will let Brian’s words speak for themselves. Because it was this response, when asked what action he wanted everyone to take with them as they left the conference, that was the only message that mattered at Green Biz 20.==

Advocacy not silence. Bravery not fear, and for some of you, remorse not ignorance. I need all of you to feel the urgency that my generation is feeling and I need you to know who you are. It’s time to decide when history looks back on this moment, will your children and grandchildren be able to see that you were one of the people who stood up for my generation and my future or were you one of the people who watched us die?”

I’ve only sold one thing. Time. I know I’m not alone. Between the ad agencies, PR firms, media buying and digital shops, there’s at least

A red, white, and blue wave of compassion and gratitude

As I sit down at my Thanksgiving dinner this Thursday with my “Trump supporter” family, I will celebrate that we all voted and compassionately request that we all continue to stay engaged. 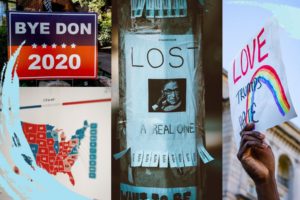 Local and State Elections Matter More Than Ever