A Warning From Minneapolis To Our Agency Friends

Two years ago I published a post about the dark cloud hanging over the then vibrant Hong Kong protest movement and that dynamics there offered a potential foreshadowing for social movements stateside. Today those clouds are darker, hanging directly overhead and that faint message of a foreshadow has been replaced with sounds of a five alarm fire bell.

We are not okay here in Minneapolis.

By now of course you know another Black life was stolen on this stolen land. Daunte Wright was murdered one week ago today. The event was broadcast on our screens just as those same screens streamed the tragic slow motion death of George Floyd and the emotionally draining trial of Derrick Chauvin that has brought us all to our knees. Esther Agbaje, a Minnesota state legislator representing Downtown and North Minneapolis nailed it when she told NPR this past week that we are living in a “continuous state of trauma.”

I know many of my agency friends who counsel brands and organizations for a living are already deeply connected to the ongoing fight for Black lives and racial justice. Since we lost George Floyd, there has been intense soul searching in the agency community, long-overdue structural fixes and in many many cases, smart, timely and impactful advice delivered to their many clients.

But there is another story that emerged out of Minneapolis this week that is triggering those alarm bells for me today. And that is the blatant, deliberate attack on our constitutional freedoms of both assembly and press. An attack that has so far been met with a stunning amount of silence by the local corporate community and our “progressive” elected officials.

While some media outlets have tried, it is difficult to effectively communicate the scene here. We are an occupied City, a deliberate, intentional choice by our State leadership to meet the fear of the outcome of the Chauvin trial with the most aggressive show of force in Minnesota state history. A choice to meet the trauma of a grieving city with troops, guns and chemical warfare. Apparently progressive leadership here – starting at the desk of Governor Walz – believes the battle for police accountability first requires terrorizing your own constituents even further.

For a clear picture of the assault on press freedoms here, take a moment to review this letter sent to the Governor yesterday on behalf of more than 30 local and national media outlets. The descriptions and images are indisputable. My own colleague and business partner, who also is a credentialed freelance photojournalist who has captured the power and pain of the justice movement for the past year, was hit in the head by a flash bang grenade this week. (He thankfully walked away with a mild concussion only because he was wearing protective gear).

If you are a corporate counselor or agency practitioner who is counted on to help steer clients through social movements, more is needed of you now. Just as you fought for long-overdue equity commitments last year and helped protect against voter suppression just last month, we must now integrate the fight for a free press into our work and demand our clients meet this moment.

These are dark times in Minneapolis. And given the weeks ahead, with both a verdict and Daunte’s funeral on the horizon, our continuous state of trauma endures. I urge you to once again look to Hong Kong for a sign of what’s to come and what’s needed, particularly the letter Jimmy Lai (the now jailed pro-democracy Hong Kong media mogul) published this week: “the era is falling apart before us, and it it is time for us to stand tall.” 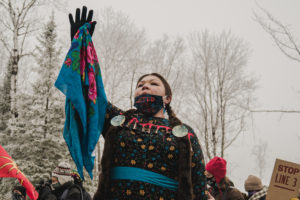